I’d never been to an all vegan restaurant until last week (I know, what’s wrong with me?) It’s not that I don’t have  local options, Veg News declared Salt Lake City as “America’s Next Great Vegan City.” I don’t have any excuses for myself other than I just don’t go out to eat that often. That same article in Veg News states: [referring to Salt Lake City] “Today, there is a vegan grocery store, two vegan bakeries, two vegan food carts, four vegan restaurants, and 50 vegan friendly restaurants with specific vegan options on their menus.“ Radical. Sage’s Cafe offers an entirely plant-based menu and specializes in local and organic food, it is one of four totally vedged out locations owned by Utah native, Chef Ian Brandt/Elevated Cuisine Group.

Want to know the best part? I met Annie from An Unrefined Vegan there for my belated birthday lunch (no applause please, it was last month). 😉  Photos of the lunch are courtesy of Annie’s Phone. 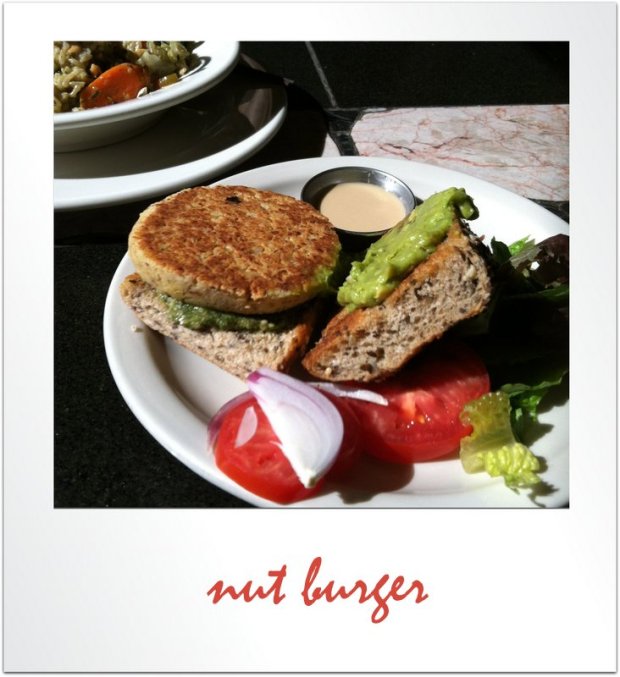 I had the Guac-n-Roll Sandwich, which is an amazing nut burger, made with cashews, almonds and garbanzo beans served on a locally made seven grain baguette with guac. Everything about it was delicious. The baguette was perfectly toasted, the pesto had just the right verve and the nut burger was beautifully seasoned. It tasted a little like a milder and yummier version of falafel. The only thing left on my plate after a few minutes of bliss was a sliver of red onion. Did I mention the freedom I felt at being able to order anything on the menu? Totally awesome!

Annie had the Magical Wok Entrée, since we’re doing dual reviews today, head on over to her site to see what she thought about it. As you can see, from the photo below, it’s presentation was fantastic.

We had a lot of catch up to do since we hadn’t seen each other for a while. We sat in the lovely sun room, where our waiter kindly kept refilling our drinks for over 2 hours while we dined and chatted. He must have noticed the giant bag full of awesome birthday gifts she had for me because when we declined dessert, he said he would offer a birthday dessert on the house. We asked for his suggestion and both said YES when he mentioned the tiramisu. 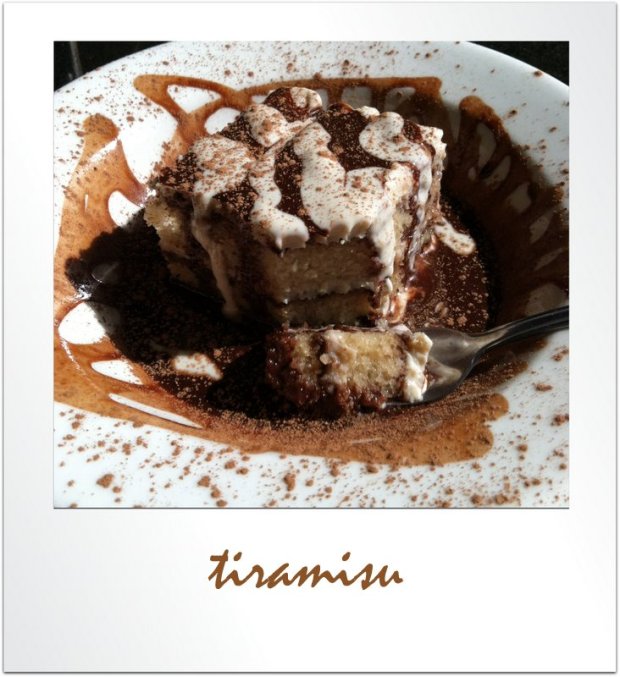 Although I couldn’t detect even a hint of espresso, I have to say it was one of the most delicious tiramisu(s?) that I have ever eaten. If I wasn’t in a vegan joint, I would have never guessed this culinary confection was completely dairy free. In short, it was incredible. We finished every last bite and it was only out of politeness that I didn’t lick the plate.

The food, the company and the warm ambiance of the sun room made for one of the best afternoons I’ve had in a while. My only complaint about Sage’s is that despite driving up and down the street multiple times, I couldn’t easily identify it from the road. I finally parked and walked and then texted Annie to guide me there beneath the grape vines. I will tell you that I went home feeling happy, light, refreshed and ready to conquer the world (usually when I leave a restaurant I feel bloated, tired and uncomfortable). While Annie and I aren’t eloping any time soon, there’s not a lot of time left to sign up for our baby (project), the Virtual Vegan Potluck. If you’ve wanted to join and haven’t done so, DO IT! There’s literally less than  2 slots left. It closes when it reaches 100 participants. 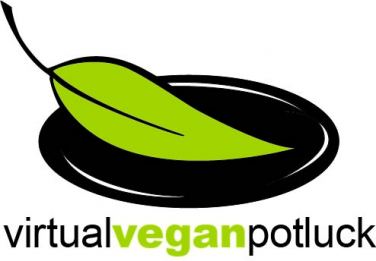 Oh, you’re still here and want to know what I got for my birthday loot?

The Complete Guide to Vegan Food Substitutions, let’s just say upon returning home I couldn’t put this book down for several hours and have all ready made  6 things out of it since Friday. I really (really) wish I had this book when I first went vegan. It would have made my transition SO much easier. If you don’t own it, BUY IT RIGHT NOW!

Blog Photo Plates – Annie knows me so well, these babies are made of unbreakable melamine.

Forks Over Knives the Cookbook – Over 300 Recipes for Plant-Based Eating all Through the Year. The name says it all! In LOVE! Thank you so much Annie!!! xoxo!

I work hard to create original content, including my photographs and written text. Once I publish something, it's covered under copyright laws immediately so please don't re-publish content from this site elsewhere without my permission. Please contact vedgedout@gmail.com for permission/questions/inquiries. Thank you.